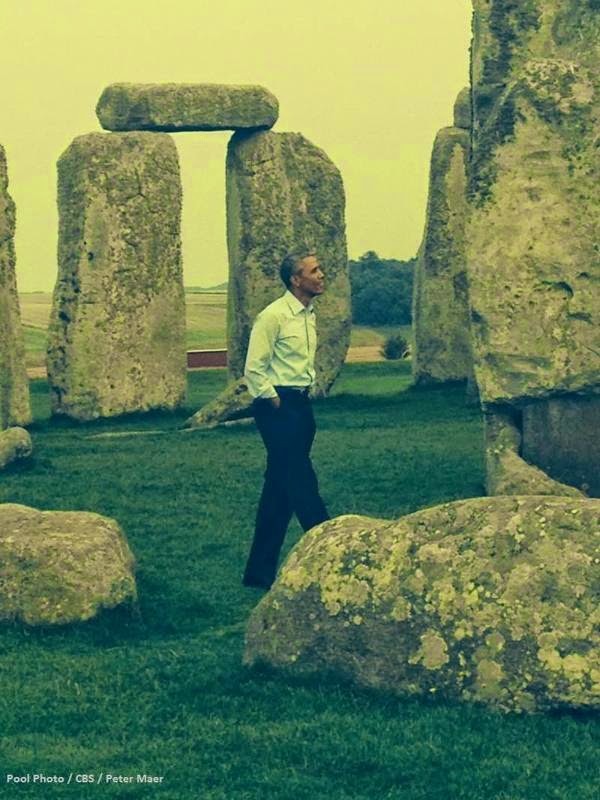 When making the unscheduled trip, the American President said: "How cool is this? ... knocked it off my bucket list."
Mr Obama made the surprise stop at Boscombe Down Military Base in the Marine One helicopter following the NATO talks held in Wales"!

Mr President, we know you're a very personable man as this was evident when you met our local family...The Raffles, who were in raptures at meeting the most powerful man in the World!!
However! as the Founder of STAG: Stonehenge Traffic Action Group and a resident of the village of Shrewton...... Sir, your motorcade is impressive, and under normal conditions, it should have taken you to Stonehenge using our notorious A303 the main route west....but obviously the lead driver had inside knowledge.....maybe he even looked at my blog reached at www.sh2.co.uk before he left the US, telling him of all the problems we have with the A303.....since the closure of the A344...that was the road you were taken down from the Visitor's Centre to actually reach the Stone Circle.   6000 vehicles a day used the A344 before it was closed by www.english-heritage.org.uk in June 2013 to accommodate the New Visitor's Centre.   Now all of those vehicles, along with those headed to the Visitor's Centre, and those headed south, north and west, are on the A303.....creating the notorious bottleneck at Stonehenge Bottom....see photos on other posts on my blog as previously mentioned.   This is why you were taken around the "Rat Run" route.....good planning there by someone...yes!   The Rat Run covers all of the villages around Stonehenge and has made our lives a misery and you Mr President, are well and truly one of those Rat Runners!  But since you're a very nice man, we can forgive, and it was an honour to receive you in this part of Wiltshire!
Oh yes! and while we're on the subject of the "NEW" Visitor's Centre Sir, I do hope you and the individuals part of your motorcade paid the £14.90 entrance fee, and had booked in 24 hours prior to your arrival, like we have to!!!    You may be interested to know, that Stonehenge was gifted to the Nation, by One - Sir Cecil Chubb, in 1918.....please see a previous post "EH Hands off our Byways" 08.05.2014.   He said that everyone should enter for just 1 shilling.   English Heritage are the custodians of the Stone Circle and even we locals have to pre book, tho' they have so far, stood by, the free entrance for local people......but for how long?
Currently Sir, over 4000 Americans have looked in on my blog since its inception in the Fall of last year...for which I thank them, and your Goodself for taking the time to read this.   I do hope you will take it in the light hearted way in which it is meant.
Please come and visit our beautiful county again soon......but stay off that A303 y'all!!!
STAG has another blog: http://bypasswinterbournestoke.blogspot.com 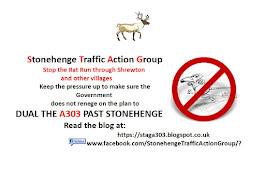 Improve the A303 West from Stonehenge